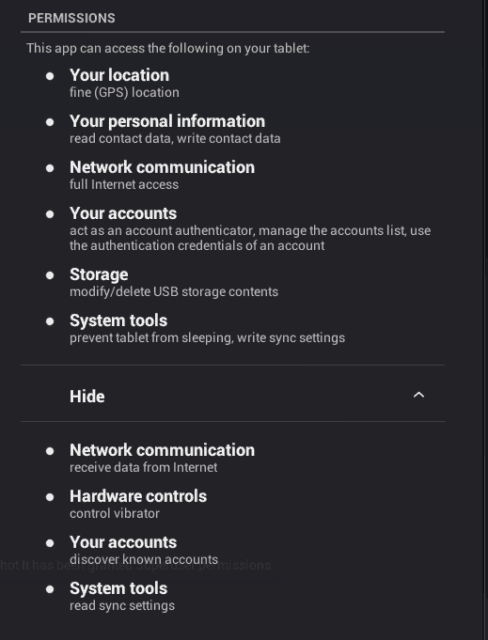 The purpose of a permission is to protect the privacy of an Android user.

According to Android documentation for app developers, permissions fall into two groups – normal and dangerous.

As a VPN user, you want your VPN to not ask any kind of dangerous permissions that are not needed for the VPN app to function or which can compromise your privacy.

In this study, 81 Android VPN apps were evaluated based upon the permissions that they request.

Our goal was to find out the most commonly used permissions by the VPN apps as well as the questionable and more suspicious permissions that are either not needed for the VPN app to work or are violating the user’s privacy or security.

Most Commonly Asked Permissions By VPNs

Android has a variety of different permissions for different purposes. Depending on what an app wants to do and how it does it, it may need a different set of permissions. Table 1 shows the most common permissions requested by the VPN apps in this study.

Many of the permissions above are needed for a VPN to function, these include getting access to Internet, checking your connection status and keeping your app awake. These are completely normal and shouldn’t cause any worry. They are listed as “normal” by the Android developers.

However, in this list, there were also “dangerous” permissions that could potentially compromise Android user privacy, these were related to getting access to your precise location, device name, your phone number and reading your SD card.

The permissions to read and write from external storage required to collect error log. We have 24/7 support and if application does not work as expected then users can collect logs for tech. support by long press on “Support” button. The application will ask if the user wants to enable log collection and if user agrees then application will save its log to external drive. User can reproduce the issue and press “Support” button again to send an email to our support team. The log will be automatically attached to the email and removed from external storage.

A Look Into “Dangerous” Permissions

Once we had identified all the permissions of each 81 VPNs (including the common ones), we filtered out permissions that were not needed for a VPN app to function and can potentially harm the user’s privacy.

Many of the VPN apps reviewed in this study ask for permissions that are not needed for a VPN to function.

Some permissions are fairly harmless. Like the ability to cause the phone to vibrate or push app notifications.

However others are more suspicious. While these permissions can be used for benign purposes (i.e. requesting access to coare location is a way to get the name of a WiFi network for handling reconnections), they also have the ability to compromise the user’s privacy.

Table 2. Apps with most suspicious/dangerous permissions

Another notable permission used by oVPNSpider and tigerVPN is the READ_LOGS permission. This permission is no longer available to third-party apps (like VPNs) due to privacy concerns, and the app should not be requesting it at all.

Below are explanations of suspicious permissions asked by Android VPN apps:

Allows VPN to read and write to external storage – not needed for a VPN app to function and could compromise user’s privacy.

Allows VPN read only access to phone state, including the phone number of the device, current cellular network information and the status of any ongoing calls – not needed for a VPN to work.

Allows VPN to use WiFi or mobile cell data (or both) to determine the device’s location – potential privacy risk.

Allows VPN app to to read or write the system settings – high security and privacy risk.

Allows VPN app to read the low-level system log files. Not for use by third-party applications, because Log entries can contain the user’s private information – high privacy risk.

Allows VPN application to manage access to documents, usually as part of a document picker. This permission should only be requested by the platform document management app. This permission cannot be granted to third-party apps.

Allows an application to retrieve state dump information from system services. Not for use by third-party applications.

In the last table, we are listing out all the VPNs we tested and their permissions in total, custom permissions and suspicious permissions.

Link to spreadsheet of all the permissions asked by the VPNs.

In theory, VPN apps should only need a few permissions to function. INTERNET and ACCESS_NETWORK_STATE should usually be enough.

However, as an average, 11 permissions are asked per VPN app.

Android provides a wide variety of possible permission for applications to take advantage of. However, there is also the potential for apps to define their own permissions as well. In many cases, these permissions are benign, like allowing an app to talk to the maker’s cloud systems (a commonly requested one for these apps).

Higher up the table are VPN apps that have the most dangerous permissions that could affect user’s privacy. Especially Yoga VPN, ProxPN and TigerVPN

However, the use of a large number of dangerous permissions could be cause for suspicion.

When selecting and installing a VPN app on Android, paying attention to permissions is important. Read the description and think about whether the app really needs the ability to record you in order to provide a VPN service. Some of the apps from the biggest companies turned out to be the most suspicious in this study, so you can’t just trust the big names.