People spend more than 11 hours per day staring at screens, even when they’re at work. To help increase productivity in the workplace, some employers restrict access to sites designed for shopping, streaming, or social media use. Nevertheless, determined employees find ways to bypass blocked sites.

To understand how workers are breaking through firewalls and why, we surveyed 1,014 employees who worked for companies that placed restrictions on certain websites. Our findings reveal which sites are most often blocked, how employees get around restrictions, and what happens when people get caught. Keep reading to see what we found.

Internet filtering is an accepted practice in most states to protect children from explicit or harmful material. Website blocking at work is also common but mostly done to increase productivity in the workplace.

Sixty-four percent of the participants in our study worked for a business with restrictions on certain websites. But that didn’t stop some: 2 in 5 employees admitted to accessing a restricted site while at work. Adult or mature websites were blocked for 84.7% of survey participants, but websites that contained illegal content (77.9%), gambling sites (71.2%), and dating platforms (59.9%) were also commonly prohibited.

According to recent data from the Pew Research Center, 73% of Americans use YouTube, and 69% use Facebook. Slightly more than half of the employees in our study reported social media websites were blocked at work, but 40% felt it was appropriate for digital socializing to be banned while on the clock.

While listening to music in between tasks could boost productivity at work, we found that 31.8% of workplaces blocked music streaming websites. However, the decision wasn’t supported by employees – the majority (84%) of employees agreed they should be able to listen to tunes while working.

Millennials grew up using the internet, and employees in their 20s and 30s admitted to bypassing workplace website restrictions more frequently than others. But 23.4% of people age 50 and older also got passed firewalls at work.

So how did they do it? The use of cellular data was the No. 1 way: 89.7% of people got around restricted sites using their mobile data. Following that, 14.2% used a virtual private network (VPN), which allows private browsing on the internet. Although nearly 52% of employees reported being rarely or only occasionally successful at bypassing their work’s firewall, 54.5% of those who used a VPN were frequently or always successful at accessing restricted websites. 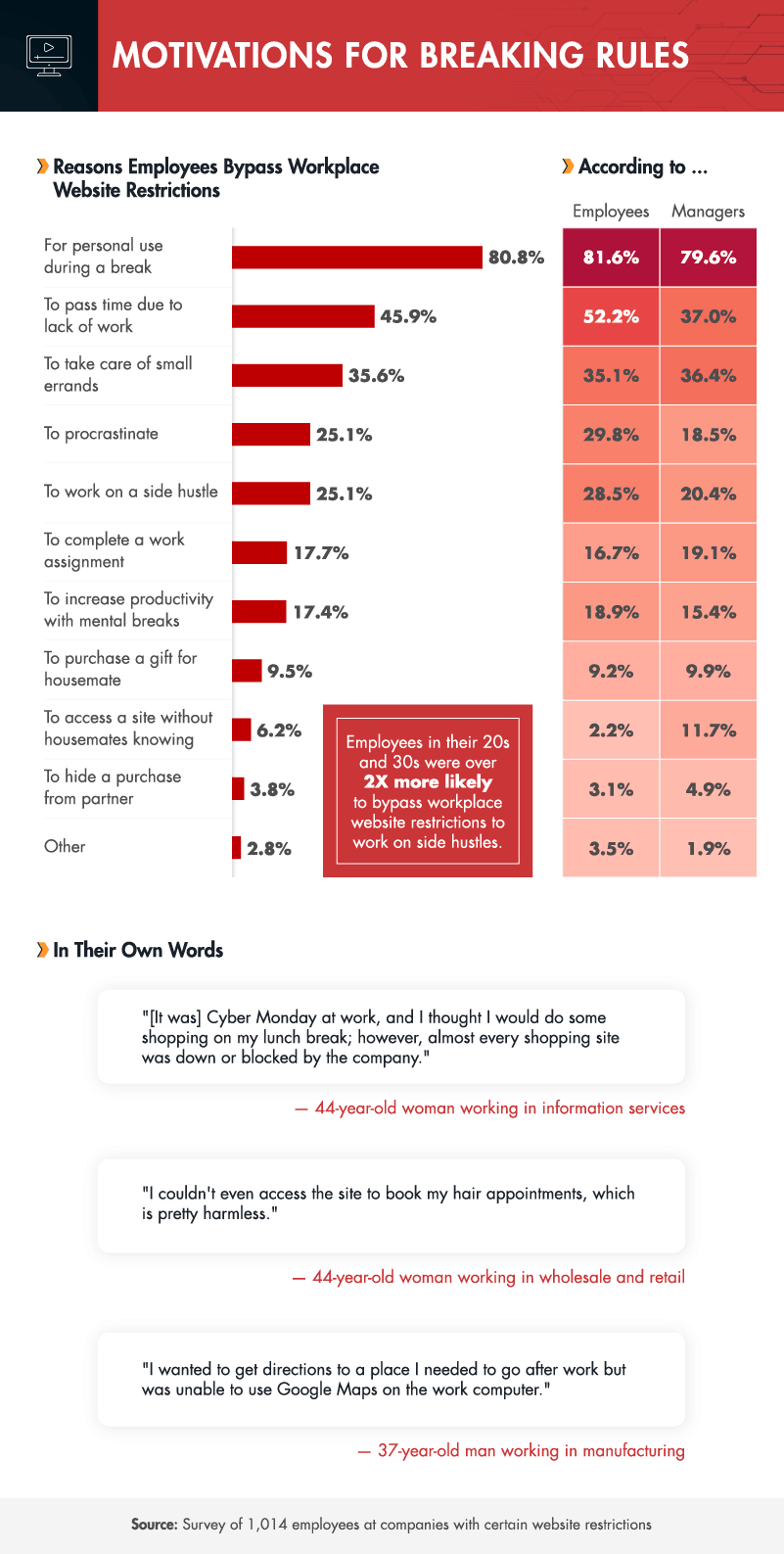 Because of social reformer Robert Owen, we now have eight-hour workdays, but some argue that workers are really only productive five to six hours daily. Our findings may support that belief.

Although 80.8% of employees clicked their way around a workplace firewall during a break, 45.9% did so because they didn’t have enough work to complete, 25.1% accessed restricted sites to procrastinate or work on a side hustle, and 17.4% said they needed mental breaks. Our study also found that managers bypassed website restrictions: They were five times more likely to break a workplace firewall when they wanted to hide online activity from people at home.

Do Bypassers Get Caught?

Federal labor laws prevent employers from firing employees who complain about job conditions on social media. But it’s permissible for businesses to bar the use of social media sites, such as Facebook and Twitter, while on the clock.

However, 9 in 10 workers who bypassed restricted websites reported not getting caught. Over 2 in 5 who were caught said their IT department monitored browsing. What happened when they were found out? Forty-two percent were given a warning, and 25.9% were placed on probation. However, less than 10% of people lost their job for bypassing their workplace’s firewall.

Ahead of holidays like New Year’s and Valentine’s Day, nonwork-related browsing will likely spike. According to our survey, nearly 1 in 5 employees bypassed their workplace restrictions to keep their online activity a secret from those at home. Whether it was to purchase a gift or to hide buying activity from a partner, some employees wanted to keep their privacy.

While browsing at work may not alarm a parent or spouse, breaking workplace firewalls doesn’t guarantee anonymity. One of the most effective ways to securely access the internet is through a virtual private network (VPN). Visit TheBestVPN.com to learn how you can protect your privacy and bypass censorship. We’ll also help you find the best service to meet your online security needs.

This project relied on self-reported survey data, which was curated via Amazon’s Mechanical Turk platform. There were a total of 1,014 participants. To qualify for this survey, participants needed to be currently employed (either part or full time) and work in a place where there were restrictions on certain websites.

Also, as the data rely on self-reporting, there is the potential to introduce issues, such as exaggeration and selective memory.

Feel free to share what you’ve learned about bypassing workplace firewalls for noncommercial use. All we ask is that when you share our graphics and content, please link back to this page to cite the authors of the study.