More Americans traveled outside the U.S. than ever before in 2018. Although the numbers are still coming in for 2019, the U.S. International Air Travel Statistics Program reports that nearly 76 million people journeyed outside the country by plane, which could make 2019 the most significant travel year to date.

Although millions of people fly, some have to go the extra mile to book an affordable flight. But what if we told you it’s possible to book from Norway without using the Norwegian Airlines trick? That’s right: No Google Translate, just a virtual private network (VPN).

Unlike perusing flights in incognito mode, a VPN might be more effective because it allows users to browse the internet completely anonymous. To determine whether you can save on a flight by changing your IP address to a different country – a trick called geo-spoofing – we searched the same five round-trip flights from 20 countries. Read on to see which countries offer the best savings.

Book Anonymously and Save Significantly 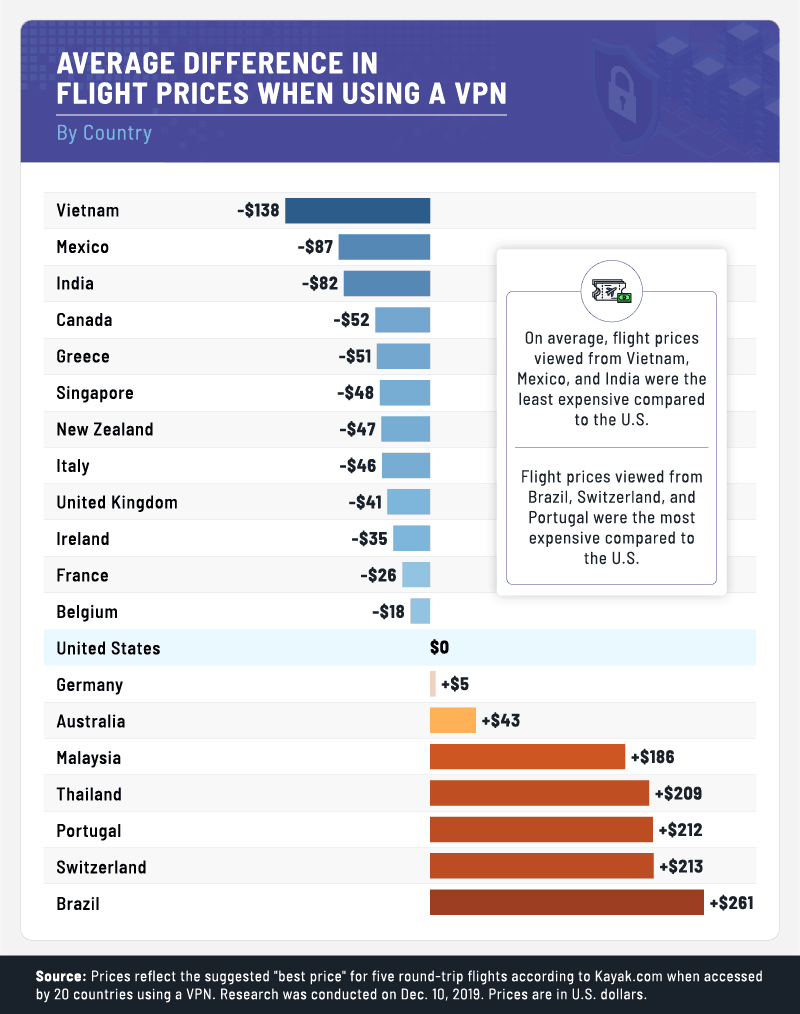 The cost of airfare takes up a large chunk of Americans’ travel budgets. However, if a flight is booked using a VPN, the price may fluctuate because airlines are unaware of previous site activity or your location.

Of the 20 countries analyzed, flight prices checked from Vietnam were the cheapest, followed by Mexico and India. Compared to booking from the U.S., using an IP address based in the Southeast Asian country saved $138. Conversely, flights purchased from Brazil, Switzerland, and Portugal were the most expensive, with Brazil averaging $261 more than the U.S.

While there’s no clear explanation for this trend, Brazil has the fourth-highest number of internet users, after the U.S., India, and China, but its population is significantly smaller. Taking this into consideration, perhaps a larger percentage of Brazilians search for flights compared to the other three countries. 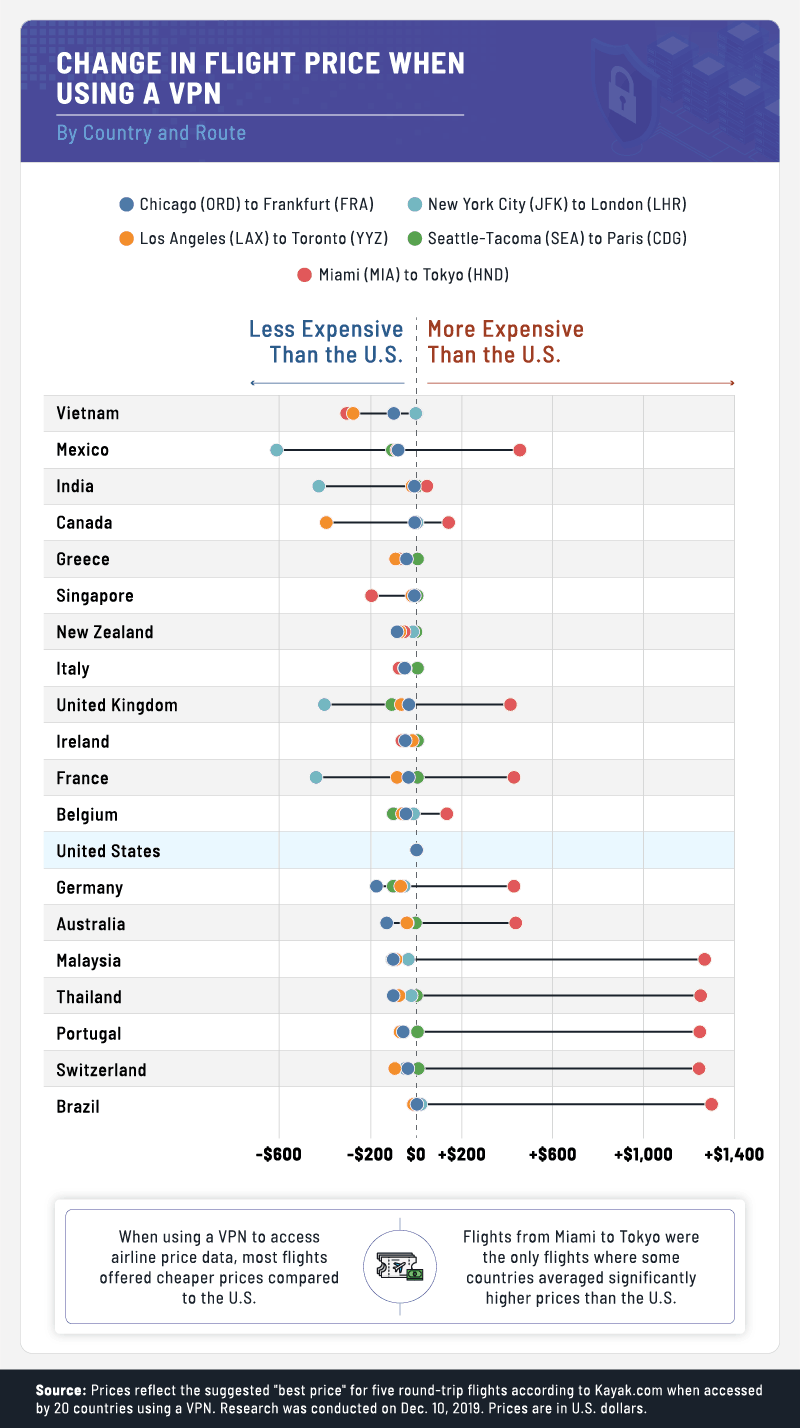 An experienced traveler knows where you fly from (and to) can impact airfare costs. So, let’s have a look at our five flight departure and return locations. Do travelers save on all routes?

Vietnam is a sure thing: All five flight routes were less expensive when booked from Vietnam. However, a round trip from New York City (JFK) to London (LHR) saved the least ($4). Conversely, Miami (MIA) to Tokyo (HND) cost $307 less than booking from the U.S.

The No. 1 money saver, however, was booking a flight from New York City to London from a Mexican IP address. Travelers stood to pocket $615 compared to booking from the U.S. But Mexico lost its charm once we searched the Miami-to-Tokyo route, which cost $454 more than the U.S.

Japan is a compelling case: The rise in tourists visiting the country is “statistically off the charts.” Between 2012 and 2017, Japan saw a 250% increase in international tourism. And Japanese Prime Minister Shinzo Abe wants 40 million visitors in 2020, which suggests that no matter where you’re located, searching for a flight destined for Tokyo could be costly.

If you want to increase your chances of saving a buck, don’t set your IP location to Brazil, Malaysia, Thailand, Portugal, or Switzerland. The Miami-to-Tokyo route was over $1,240 more expensive than the U.S. in those regions. Instead, purchase from Vietnam, Singapore, Greece, Italy, New Zealand, and Ireland – you’ll save at least $65 (Ireland) and at most $307 (Vietnam).

Savings at a Glance 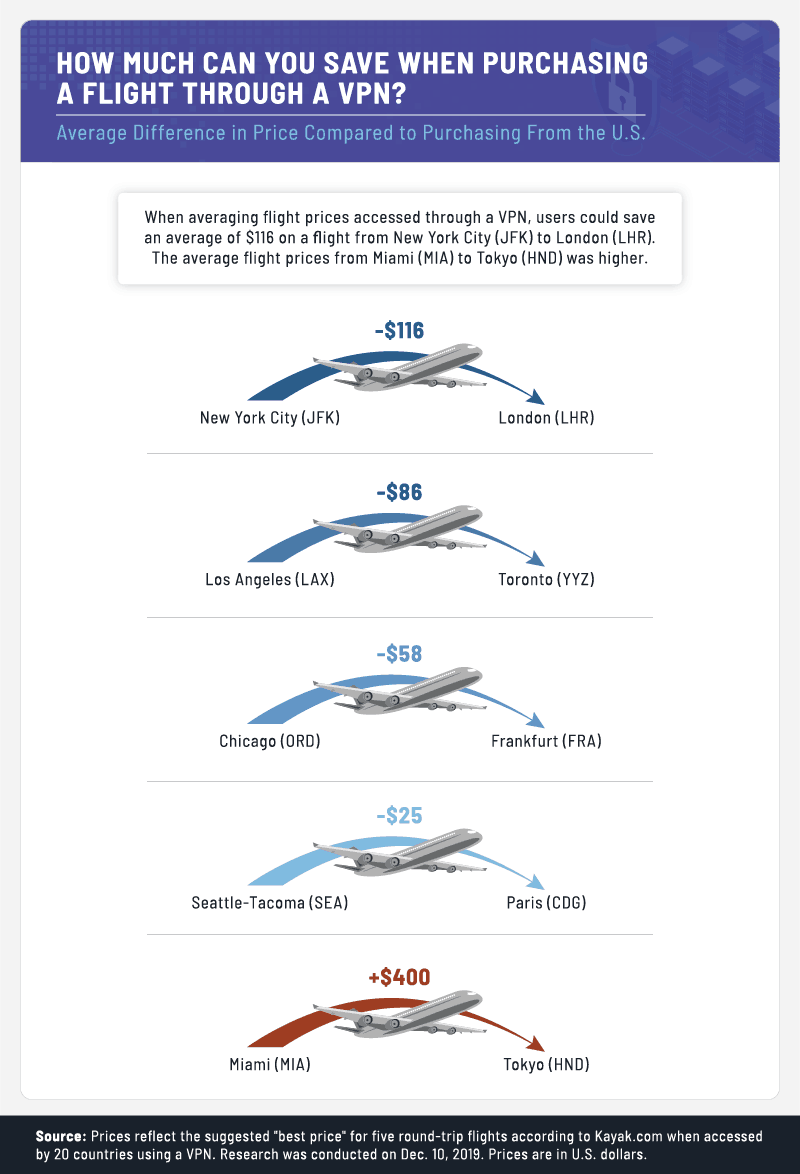 We’ve shared a great deal of information so far – let’s have a review. Flight routes from Miami to Tokyo were the most expensive across the board and averaged $400 more than booking with an American IP address. However, the New York City-to-London route was the cheapest, averaging $116 in savings. Los Angeles to Toronto, Chicago to Frankfurt, and Seattle-Tacoma to Paris fell in the middle.

Here’s What It All Costs 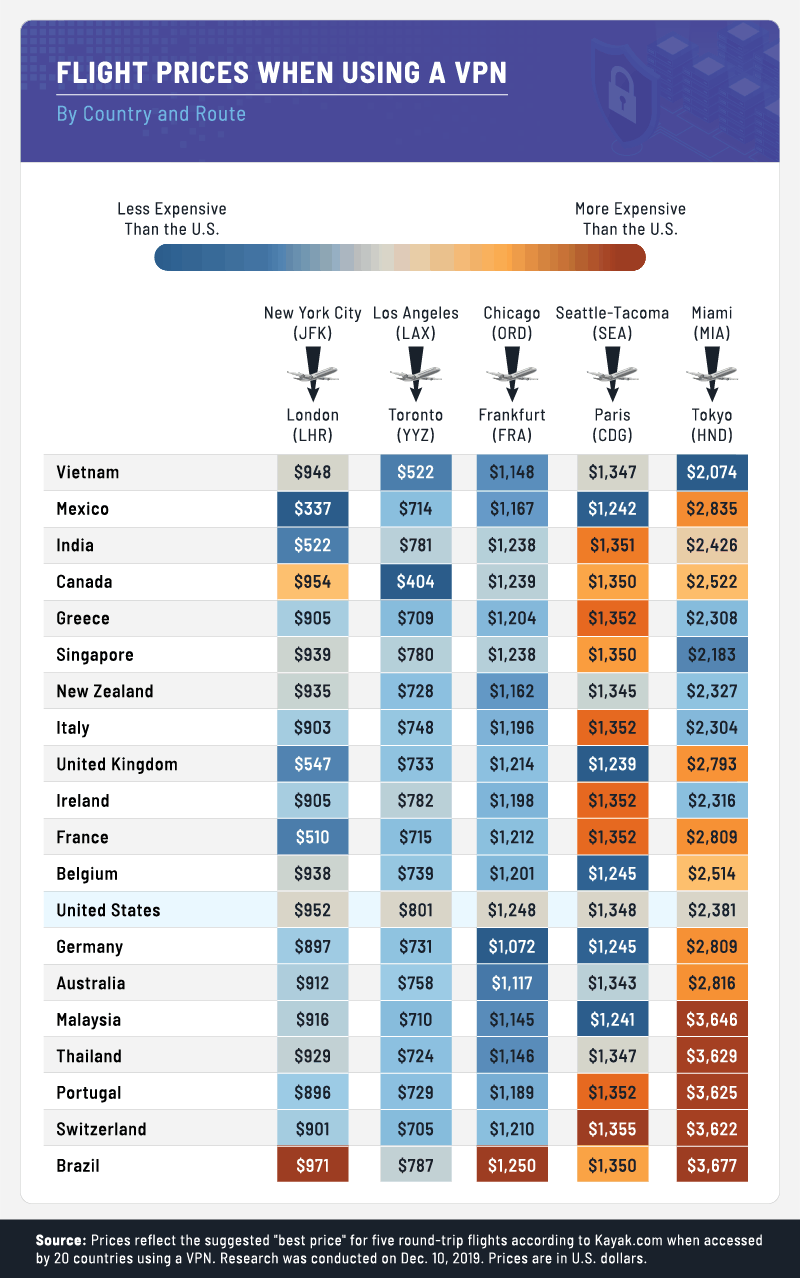 Twenty countries and five flight routes later, you’re looking at 100 prices. Although all of the searches were done on the same day, the rates varied, and we laid them out for you in U.S. currency. Sometimes, it helps to see how much your spending, not only what you save.

The most costly flight, Miami to Tokyo, was $3,677 at its most expensive and $2,074 at its cheapest. If you’re a frugal traveler, set your IP address to Mexico and book a flight from New York City to London. But take into account that the Los Angeles-to-Toronto route costs less than $800 in all locations except the U.S. Outside of Miami to Tokyo, none of the other four routes exceeded $1,355.

Use a VPN: Travel for Less

Gone are the 2 a.m. Tuesday alarms so you can search for cheap flights – save big on popular travel destinations without losing sleep. Our findings suggest that using a VPN to geo-spoof while perusing flight routes might be favorable. However, it’s important to consider trends: For example, while a flight from Miami to Tokyo fluctuated in price, the savings weren’t significant when compared with the U.

Are you excited about booking your next flight? Think about setting up a VPN so you can browse airline websites anonymously and from a country where you’ll save more on your ticket. Visit us at TheBestVPN.com to browse comparison guides and resources – we’ll help you find the VPN that most suits your travel needs.

We used a virtual private network (VPN) service to check variations in prices of five international flights based on the country from which the prices were checked. We recorded prices across 20 countries for a total of 100 data

Using a VPN, we connected to a metasearch engine for flight prices. We collected prices for round-trip travel from New York City (JFK) to London (LHR), Los Angeles (LAX) to Toronto (YYZ), Chicago (ORD) to Frankfurt (FRA), Seattle-Tacoma (SEA) to Paris (CDG), and Miami (MIA) to Tokyo (HND). All flights were for travel departing on Jan. 3, 2020, with return on Jan. 10, 2020. Some flights included stops but remained consistent for each flight.

Prices were obtained on Dec. 10, 2019. Prices were obtained from the same metasearch engine for airfare. The parameters to obtain each flight were the departing airport, arrival airport, departing date of Jan. 3, 2020, and the arrival date of Jan. 10, 2020. This search was repeated across 20 countries with the same parameters using a VPN. The suggested “best price” for each flight was used across all countries. All prices were then converted to U.S. dollars as of Dec. 10, 2019. All searches were conducted in private browsing mode for Google Chrome.

It is possible that with a greater sample of flights for each country, we could have gained more accurate insight into how accessing flight prices from different countries may influence the price of the ticket.

Although all prices were recorded on the same day, it is possible that regular fluctuations in prices may have affected specific countries more than others based on the order and speed in which the data were collected.

The data presented here are based on means alone and are for informational and exploratory purposes. Individual experiences may vary.

Flight deals shouldn’t only happen when your airline decides you deserve a deal. With a VPN, you can reward yourself any day of the week, and that information is worth sharing. So, please pass our content and graphics on for any noncommercial reuse. We just ask that you link back here so those you share with can access the entire study and review the methodology. This also gives credit to our contributors for their work.