Goose VPN is run by Goose B.V., out of Rotterdam in the Netherlands.

The Netherlands is known for its open-mindedness, its liberalism, and its funny accents.

But is it also known for excellent VPN services?

That’s exactly what we’ll find out in this Goose VPN review.

We signed up for their server, ran them through a series of tests, and have lived to talk about it.

Here’s what we found.

They provide a good selection of protocols, strong encryption standards, is available almost everywhere, and is easy to use.

They even have special servers that work with Netflix.

Here’s what we liked about them. 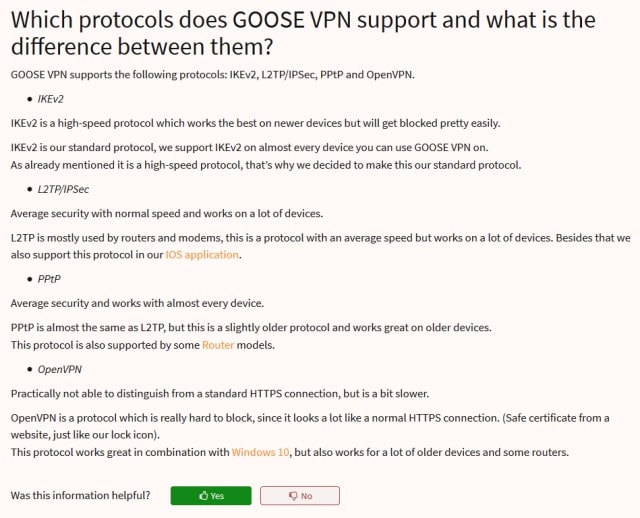 The default standard is IKEv2 because it is seemingly the fastest. But Goose VPN admits that IKEv2 can “get blocked pretty easily.”

Their FAQ section does an excellent job helping you figure out which protocol is best (based on your objectives).

For example, L2TP is best for routers and modems, and OpenVPN is really hard to block but slightly slower.

The good news is that you’ve got options across their 114 servers in 25 countries. That’s not the smallest server network we’ve seen.

It’s favored by the US government for a simple reason:

So you can rest assured nobody is hacking in to see you listening to ABBA on Spotify.

GooseVPN allows torrenting, but only on specific servers.

To find out which servers are torrent/P2P approved, drop down the countries list in your Goose VPN desktop app and look for the countries marked “P2P Server.”

They’ll have a little “P2P” icon next to the signal strength. 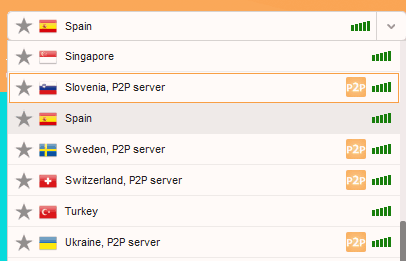 But that’s not all.

They also work with Android TV, routers, NAS Firewalls, ChromeOS, and Raspberry Pi. I literally had to Google that last one.

Speaking of Google, there is also a Chrome browser extension that you can use without installing the desktop client.

You can also hook up gaming consoles through the router.

Unlike some others, Goose VPN also provides native apps to install on your phone. Just look in the app store.

In a radical departure from other VPN services, you can use the same Goose VPN account on as many devices as you want at the same time. Hooray!

However, if you are using the restricted 50GB a month service, using lots and lots of devices is going to suck up that 50GB in no time at all.

Goose VPN’s client is extremely simple to use.

You choose your country, flip the switch, and that’s it. Connection is fast and easy.

If for any reason you need to change the server, just drop down the countries menu and pick your preferred place. You don’t have to disconnect the current server first. You can just choose the new server and Goose VPN will jump over. 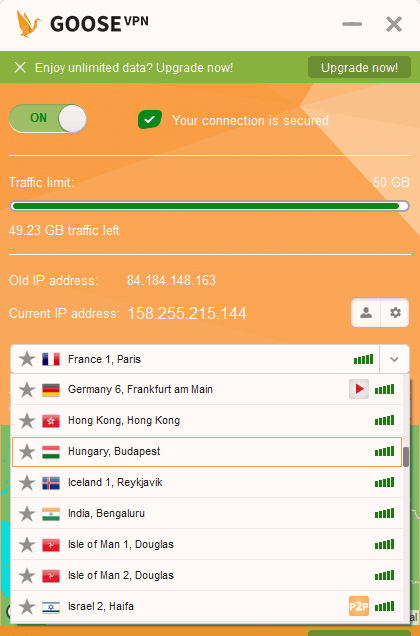 Just remember to enable the Kill Switch in the settings first, so your real IP address is not temporarily revealed while changing servers.

Which brings us to the next point…

A Kill Switch isn’t as lethal as it sounds.

Instead, it will temporarily cut off your Internet connection while it finds and connects to a new server.

This also cuts off your connection when transferring between different servers or if you lose your Goose VPN connection.

The purpose is to stop your actual IP address from being temporarily revealed when Goose VPN is off for whatever reason.

The only catch is that you must switch it on yourself. It is off by default.

Unfortunately, it does nothing to secure your traffic.

That’s why doubling-up with a VPN is key.

Just keep in mind that the more VPN connections you run it through, the slower your connection is going to be. That is the trade-off for anonymity.

Netflix is no longer willing to indulge ‘region shopping.’

Sadly, that’s no longer the case.

Netflix has been shutting off VPN access in droves.

In fact, only a handful of VPNs still work on Netflix at all for this very reason.

The good news is that GooseVPN offers a few ‘special streaming servers’ to help avoid detection.

We had a little trouble with some US and UK servers but were able to unblock Netflix using the special streaming servers successfully.

GooseVPN started well. They had all the makings of a star on paper.

But cracks started appearing when we put them through a few tests.

Here’s what we discovered.

The Netherlands might be known for their laissez faire approach towards recreational indulgences.

Netherlands is a member of the extended Nine Eyes intelligence allegiance. That means they’re legally obligated to share online user information with the other eight members of the agreement in the interests of national security.

This would include keeping logs on suspected terrorists, as detailed in the “no logging” section we’ll get to below.

We tried clarifying these points with their support reps. But let’s just say that they were uncooperative.

Live Support actually said to me that they were “not authorized to talk about any other VPN provider other than Goose VPN.”

Let me shorthand things for you:

If you want a VPN for privacy and security, a Dutch VPN shouldn’t be at the top of your list.

Especially one that point-blank refuses to discuss things.

Goose VPN confirms they do not keep logs and user information on their site.

However, there is a confusing contradiction where they then say that “if a public body suspects a Goose VPN user of criminal activities (terrorism for example), we can keep a log on this specific user.”

So would the logging start after they were alerted by this “public body”? And if so, what standard of proof would be required?

Ironically, they don’t seem to consider copyright infringement a crime as they then go on to say “Goose VPN does not support any other organization which supports any type of copyright claims.”

Odd to say the least.

A ‘leak’ is typically when your browsing habits are revealed.

That’s despite being connected to a VPN service.

The green connection light is on, you think you are safe, but it’s actually leaking out your real identity.

The problem is that this scenario is more common than you think.

Luckily, Goose VPN does not leak your DNS nor IP. HUH!

We used UK servers and the IPs we used to ran across several DNS leak test sites were “OK”: 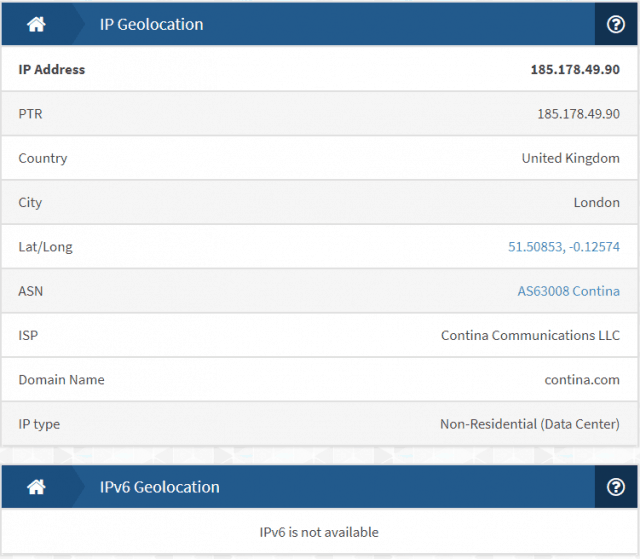 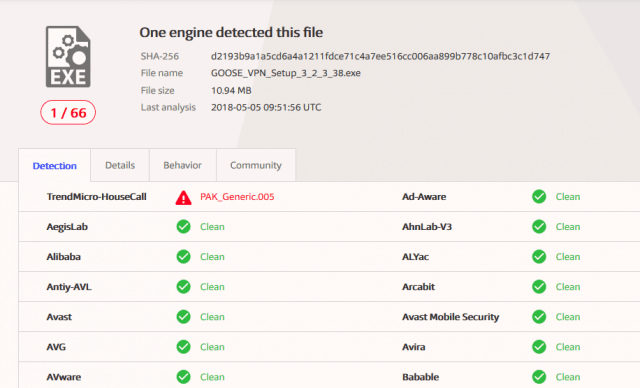 Is it safe enough? Up to you…

VPN performance shouldn’t be sacrificed for security and anonymity.

You should expect to have your cake and eat it too.

So after leak tests, we run performance ones to see how much each VPN affects browsing speed.

Then, we connect to a few different servers and see what happens. First up, the U.S. server in Texas.

Not a great start. A download speed of only 4.60 Mbps means you’re pretty much screwed.

Let’s see if the EU server in Madrid was any better.

Ok, not bad. But not great, either.

Overall, they come in around the middle of everyone we’ve reviewed at 37th out of 78.

Customer Support can be contacted via email, snail mail, social media, Live Chat, and a FAQ.

They do list a Dutch phone number as well, but stress that they do not offer any kind of technical help on that number.

First, we tried firing off an email.

After a few hours without a response, we tried their live chat.

We fired off a lightning round of questions to see just how knowledgeable (and patient) Monica was.

The interaction was strange, to say the least.

I am still not sure if “Monica” was a real person or an automated bot.

Every time I asked a question, it took a long time to get a reply. When a reply eventually came in, most of it was copy and pasted from the FAQ section.

When I asked for clarification on the first question (regarding the logging for criminal activity), “Monica” refused to clarify, instead repeating verbatim what is said in the FAQ. 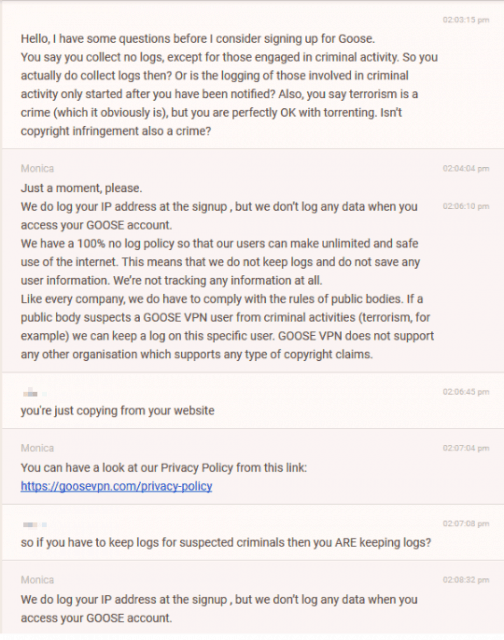 Not helpful in the slightest.

You can either pay for Goose VPN monthly or annually.

If you pay annually, you can get a discount of over 60%. That’s one of the bigger annual discount percentages we’ve seen.

They also have a cheap $2.99 restrictive monthly option. On the downside, you only get 50GB.

But it might be a decent way to test them out, first, before taking the plunge for the annual discount.

You can pay in credit card, PayPal, or through a Dutch bank debit card via iDeal (participating banks only).

To buy Goose VPN, you cannot use cryptocurrencies or cash payments. So forget about anonymous payments.

There is also a 30-day money-back guarantee, plus a free 30 initial days (kinda like a free trial).

Another excellent chance to take their service for a test drive before getting locked into any long-term deal.

Do We Recommend Goose VPN?

There are things to recommend it, such as support for Raspberry Pi. That’s pretty unique.

Netflix worked pretty well and the pricing terms of reasonable.

But the wheels started to spin off pretty quickly after all that.

The Netherlands is in the Nine Eyes agreement and will keep logs if told someone is engaging in “criminal activity.”

Except, there’s no real detail on what that means, how they’ll interpret it, or even enforce it.

Their VPN speeds are not good at all.

And unfortunately, their customer support email is both slow and unhelpful.

The live chat experience makes getting answers to your questions feel like pulling teeth (without the anesthetic).

Plus, they refuse to provide details on important issues – like who does their credit card payment processing.

I don’t recommend Goose VPN. Here’s a complete list of the best VPNs in 2019, instead.

Add your own Goose VPN review

The service is slow and erratic. Discontents all the time . I signed up and now company won't refund me. It an appalling service. No direct contact with customer services. Now I find out I'm not safe online as they keep logs. Warning don't trust this company.

I can second this I whole review. Had Goose VPN for 1 year, it wasn't expensive, but that was the only plus side. Connections are really slow (Many times I had to break VPN connection to be able to visit a simple website!!!), dropping connections, etc. There are much better providers for the same money.

DNS LEAKS ON ANY Server I Tried

I held off for a long time before I bought their hype and tried the service. IPLEAK.NET finds their server and my service provider ever time. Hmm, Then what’s the point? Start at 84.9 Mbps dl and 10.8 mbps ul before connection, right next to the Texas server in Arkansas and upon connection, speed drop to 19.9 mbps dl an 9.9 mbps ul. I might as well use a 300bd dial up modem and just make calls through to sites to visit. They expect to get paid for crappy service AND slow speeds? not likely.

Whilst in Bali I chose Goose for Netflix in Bali and it works. After back and forth to Goose I got a $29 a year subscription. Love it, easy to use and I am happy.

Paid £58 for this service which advertised as able to watch UK favourite programs while abroad. NOT true when trying to connect to all UK TV channels get the message “can’t use from outside the UK” customer service basically laughed at me when asked for my money back. Tip! Don’t go near it, look elsewhere!

… or add your Goose VPN user-review

Earnings disclosure: In order to get you the cheapest price possible, we’ll earn a commission if you decide to purchase through our links. Thanks for your support.