The use of Virtual Private Networks (VPNs) has grown considerably in recent years, as public awareness and applications continue to rise. In fact, one quarter of all Internet users have accessed a VPN in the last month, with mobile access growing in popularity:

For many users, VPNs have become an integral part of daily life. Of those who accessed a VPN in the last month: 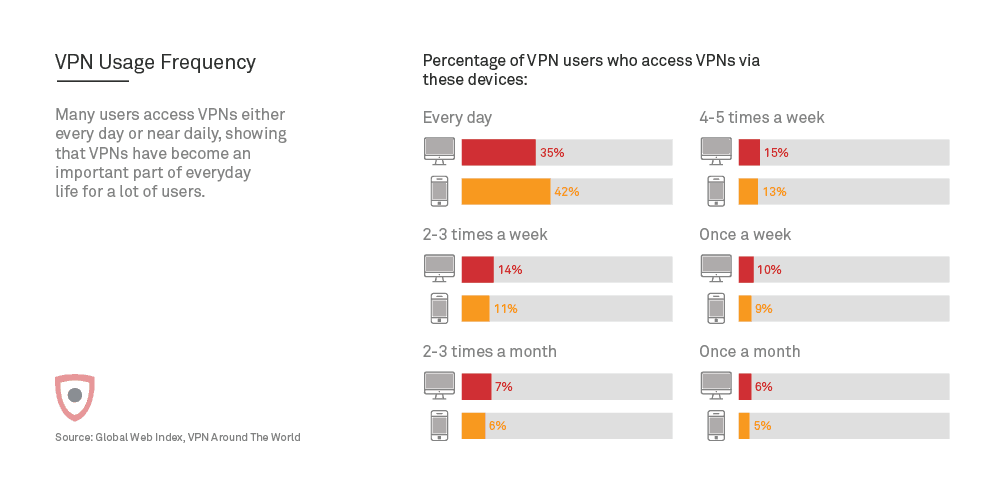 Across all users, VPNs remain most popular amongst younger generations, particularly males. The number of females accessing VPNs has increased on previous years, however:

The Asia-Pacific region continues to be heaviest users of VPNs, although they are continuing to grow in popularity among Latin American and Middle Eastern users:

Given their applications in bypassing Internet censorship and hiding browsing activity, it’s no surprise that emerging markets lead for VPN usage:

*China’s percentage is likely to drop in 2020, as the Government attempts to crack down access to VPN providers in the country.

Reasons Why People Use VPN

So, why are people using VPNs? Although motivations differ depending on the region, the top motivations across all users are: 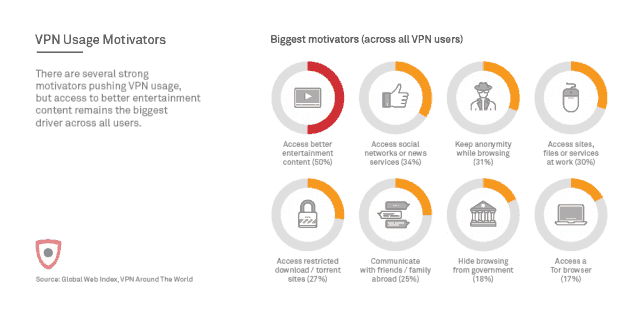 But a stronger pattern begins to emerge when we look at the regional differences: 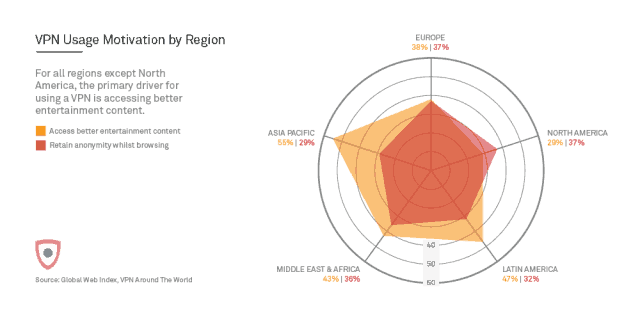 Accessing entertainment remains the strongest motivator even when regional differences are factored in, although retaining anonymity while browsing the Internet is a major application in certain countries:

Despite the primary motivation being entertainment content for most users worldwide, those who access VPNs are not pirates. 77% of VPN users are buying digital content each month, across a wide range of formats:

Percentage of VPN users who paid for the following in the last month:

It’s worth considering the growth of VPN usage alongside the global increase in overall Internet access, alongside the dramatic and continued growth of social media and mobile phone usage:

Social media use has continued its impressive climb since 2017, with one in every three minutes spent online now devoted to social media. Globally, digital consumers are now spending an average of 2 hours and 15 minutes per day on social media networks and messaging. According to a recent survey, the top motivations for accessing social media in 2020 are:

The average internet user now spends around 6 hours each day using internet-powered devices and services – approximately one-third of their waking lives. If we add this together for all 4 billion of the world’s internet users, we’ll spend a staggering 1billion years online in 2020.

Although internet use is growing, access is not distributed evenly around the world. Internet penetration rates are still low across Central Africa and Southern Asia, but these regions are seeing fast growth in internet adoption.

The global average for Internet penetration is 53%. By region however:

The highest penetration percentages in the world belong to Qatar and the United Arab Emirates, both of whom boast an incredible 99%. Perhaps unsurprisingly, the lowest is North Korea, with a shockingly low 0.6% penetration rate.

As you might expect, more people are now accessing the Internet via smartphones, accounting for a greater share of web traffic than all other devices combined:

The fastest mobile Internet connection speeds are found in Norway, where the average speed is 61.2 MBPS. The slowest is in Iraq, with an average speed of 4.2 MBPS. Thanks in part to the continued global increase in download speeds, the average global smartphone user now uses 2.9GB of data every month – a rise of more than 50% on last year.

This continued growth of mobile-first Internet use is, unsurprisingly, being driven by Millennials. Of 34 tracked online activities:

As you might expect, much of the growth in social media and mobile-first Internet is down to the US and, to a lesser extent, the UK:

With an increase in cyber attacks and ever-growing internet access, concerns around data privacy have become far more prominent. As the general-public becomes more informed about the information businesses and governments collect on them, their worries about the use or mismanagement of this data have increased:

It would seem their concerns are warranted too, with 31% of Americans saying their online life is worth $100,000 or more. Despite this, only one in four Americans believe they’re ultimately responsible for ensuring safe and secure Internet access, and 51% of consumers have had online and mobile accounts compromised in the previous year.

Most people place the responsibility for safe Internet access and the safeguarding of their data with corporations, but many IT professionals are concerned about businesses ability to effectively protect this data:

These concerns have led to a significant lack of trust from the public, with consumers expressing growing anxiety over the security of their records with corporations: 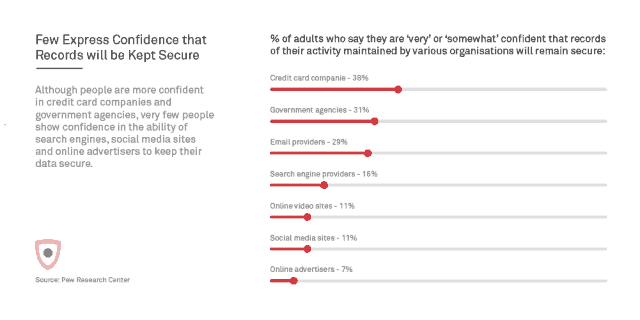