For many, the way we live our lives has moved online. As a result, our information is constantly being processed through sign-up forms, submissions, online quizzes, and even sensitive documents.

Companies must manage this data to keep it safe and prevent it from falling into the wrong hands, but issues related to leaks are still prevalent. Massive data breaches such as the Equifax leak and Cambridge Analytica scandal have even made national news, the latter of which involved the mining of personal information on Facebook.

In light of these events, online privacy is becoming increasingly important, so we surveyed over 1,000 people about how much they valued their data and even asked them to assign a monetary value to different pieces of personal information.

How safe is our data, and what are we doing to protect ourselves? Read on to find out more.

Nearly all respondents (94%) took some effort to protect themselves online, with only 6% admitting to taking no precautions to protect their online privacy. For anyone who is in the minority and wants to know where to start, the Federal Trade Commission (FTC) suggests an array of tips such as proper electronic disposal methods and internet best practices.

Changing passwords regularly proved to be the most used approach to data protection (63.5%). This practice, while tried and true, is evolving thanks to password-generating tools and two-factor authentication, the latter being a method favored by almost half of all respondents.

Some options, such as VPNs, succeed in creating a strong line of defense against potential data mining. In fact, 19.6% of people reported using a VPN to connect to public Wi-Fi to protect their privacy online. Virtual private networking is on the rise globally, allowing users to anonymize their internet activity under one server. This helps quell concerns among people who are wary about using public Wi-Fi (56% of respondents felt this way) and other vulnerable areas on the web.

Other methods, however, have wide public appeal but don’t do much in the way of data protection, including the use of incognito mode. Around 44% of people surveyed reported using incognito mode to protect their online privacy, even though incognito tabs clearly state no relation to online data protection; they only edit viewing permissions for browsing history and cookies.

For a while, covering your webcam with a slider or piece of tape was thought to be largely ineffective. That is, until FBI Director James Comey recommended the practice publicly, possibly causing 44% of people surveyed to use this precaution.

Which Data Do We Care About Most? 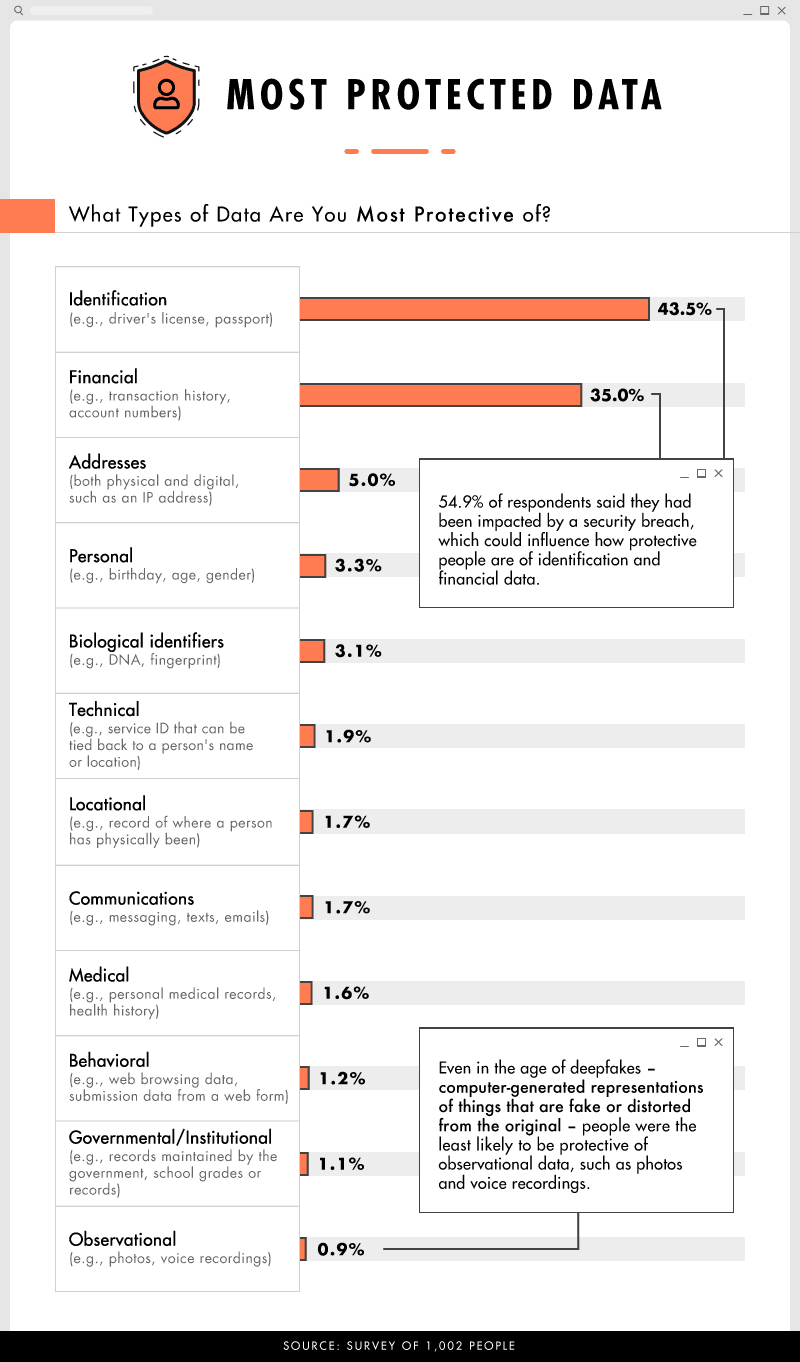 Nearly half of people said they were most protective of identification, such as a driver’s license and passport. Billions of people worldwide have been affected by data breaches at some point, putting identity protection at the forefront of the minds of many.

Similarly, respondents were likely to keep financial information under lock and key, with over one-third citing this type of data as the most valuable. Employing protection services like LifeLock can be a good strategy, but even the world’s largest banks and financial institutions are not immune to breaches.

Photos seem to be innocuous enough, especially if they don’t show any sensitive information. Less than 1% of respondents reported having concerns over this type of data. However, our faces could be digitally hijacked for deepfakes, a digital means of recreating someone’s voice, image, or video footage to alter and manipulate it. Although they are mostly used to target celebrities and political figures right now, experts say this technology is closer than we may think.

Here, we asked survey respondents to tell us which types of information were up for grabs for the right price. However, people were the most likely to protect data indicating someone’s identity.

Unfortunately, nearly 22% of survey participants were still likely to surrender their Social Security number for a quick buck. Relinquishing this important number to a questionable source can result in identity theft, and this statistic is concerning when coupled with the government’s slow response time, with some recent years capping out at fewer than 250 new social security numbers that were processed.

On the other hand, shopping data has become popular with apps that offer discounts in exchange for access to receipts and spending history. In fact, Ibotta boasted over $627 million in cash-back savings and rebates as of this writing. A majority of respondents were willing to offer both a month’s worth (61%) and year’s worth (56%) of their shopping data, indicating comfortability when approaching this type of data sharing.

Many hesitate at the idea of “selling” their data, but we give our data away every day. Besides shopping programs, we use our email addresses to sign into apps and software all the time. Over 40% of respondents refused to sell their email addresses, but many don’t bat an eye when websites ask someone to create an account by signing in with their email.

Putting a Price on Data 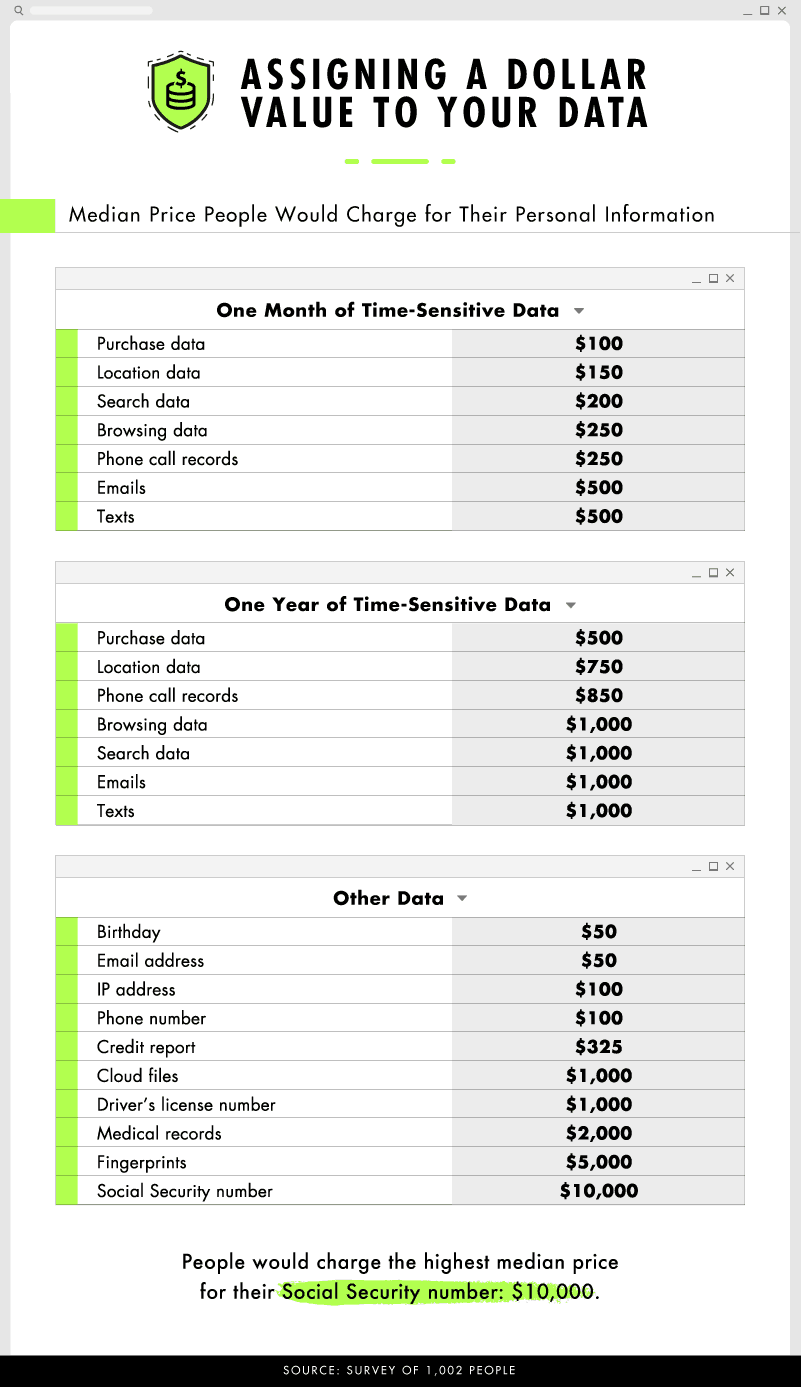 We found that people tended to greatly overestimate the value of their data. Comparing the fact that Social Security numbers go for as low as $2 apiece on the black market, most respondents radically overestimated the worth of even the most sensitive of data.

Across the board, the valuations were high, especially for information that we commonly use to sign into a variety of apps and platforms, such as email addresses ($50) and birthdates ($50).

Similarly, respondents valued one month of location data at $150 and one year of location data for $750, yet we use location-tracking apps such as ride-hailing services (Uber and Lyft) and delivery apps (DoorDash and Postmates) that already store our data.

Some of the priciest types of data that are up for grabs are medical records and passports, one-stop shops for collecting a wide variety of information. Even then, however, respondents still aimed their prices well above the going rate.

Data Brokering: The Way of the Future? 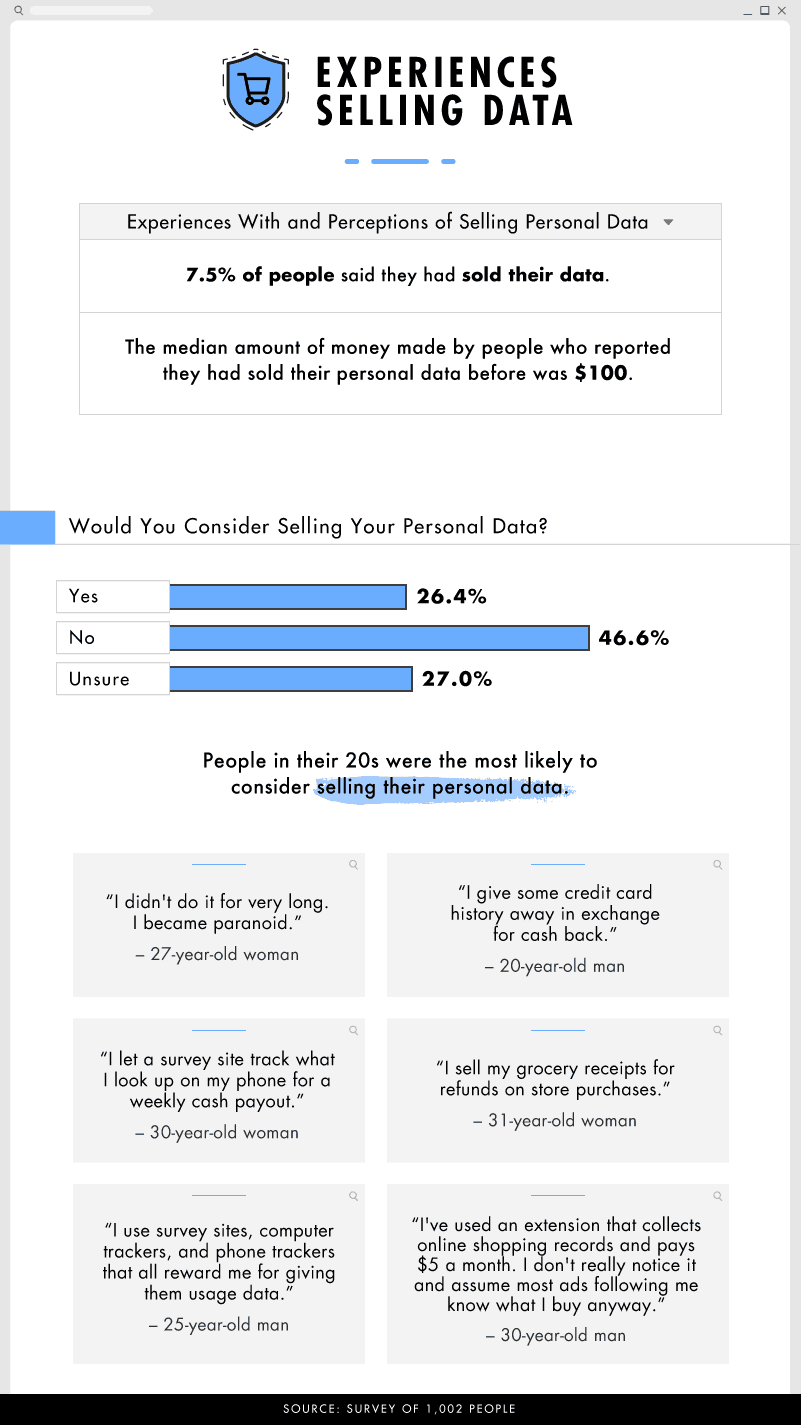 Although still small, the number of people looking to sell their personal data is growing, due in part to companies that base their profit model on the acquisition, buying, and selling of large hoards of personal data. These businesses are called data brokerage firms, and they gain data through public records and information from other companies.

These groups are not well-regulated, and data brokers can even deny requests to remove information they’ve acquired. To reclaim personal data, many are selling their data to AI groups and think tanks rather than having their data leaked or processed without their consent.

However, just over 1 in 4 people would consider selling their personal data, with people in their 20s the most likely candidates. Only 7.5% of respondents were familiar with the practice, and the median payout after selling data was $100, a far cry from the valuations that respondents cited. So this begs the question: Is selling our data really better than having it leaked? That’s up for you to decide.

Turns out, some personal data is off limits while others can be bought (and subsequently sold without consent) to the highest bidder. One of the most important things we can protect is our personal and intellectual security. Many people we surveyed admit to not doing enough to protect themselves and their identities in the digital age.

Are you looking to add the next line of defense to your digital data? Consider setting up a VPN to ensure your browsing history and data are concealed against would-be hackers and companies looking to mine your information. Head over to TheBestVPN.com to read comparison guides and resources to learn which VPN is the best for you.

We surveyed 1,002 people about their online privacy. Respondents were 51.1% women and 48.9% men. An additional two respondents reported being nonbinary, and two others did not disclose their gender identity. The average age of respondents was 38.1 with a standard deviation of 11.9.

Respondents were asked what precautions they took to protect their online privacy as a check-all-that-apply question. Therefore, percentages will not add to 100 for that data.

Respondents were asked to realistically report what price they would consider selling various pieces of data for. If they were unwilling to sell a piece of data at any price, they were told to put N/A. The median amounts presented in the final visualization of the data are based on respondents who were willing to sell their personal data.

The data presented are based on self-reporting. Common issues with self-reported data include exaggeration and selective memory. It’s possible that respondents purposefully exaggerated the prices they would put on their personal data and skewed the dataset.

No statistical testing was performed, so the claims presented are based on means alone. This is purely exploratory content, and future studies on this topic should be more rigorous.

Data privacy is not something to be taken lightly. If someone you know would benefit from this study’s findings, you are free to share for any noncommercial uses. Our only request is that you link back here so that people can view our findings in their entirety. This also gives credit to our hardworking contributors.