VPN.ht was released by a Hong Kong company called Wicked Technology Limited in 2014.

When it first launched, this virtual private network was included with the Popcorn Time BitTorrent platform, but that partnership was discontinued some time ago.

VPN.ht claims that their software lets you be completely anonymous on the internet. These claims are illustrated with the assistance of a series of adorable whimsical alien guides. 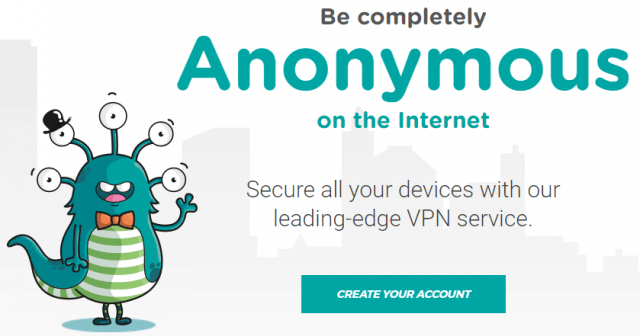 But it takes more than alien mascots waving at you while wearing a bowler hat on their eye stalk to make a good VPN.

It takes a winning combination of security, functionality, and customer support.

In this VPN.ht review, you’ll find out if that little guy was up to the task. Or if you’re better off avoiding him entirely.

I was pleasantly surprised at how many things there is to like about this VPN.

Their no-logging policy is very thorough. They’re not keeping track of any information that can be used to identify you, nor are they tracking your usage data.

They’re using some of the most secure VPN protocols and encryption standards known to man.

Also, every server that we tested worked with Netflix. All of ‘em!

Let’s dive in to appreciate all the good this program does.

It flies in the very nature of a VPN’s existence to keep logs of your information.

If you’re using a VPN, you want security and anonymity. But still, so many VPNs log important personal information and keep track of your activity while you’re using their service.

So while your ISP might not know exactly what you’re doing, your VPN does.

VPN.ht is quick to state that it keeps no logs. 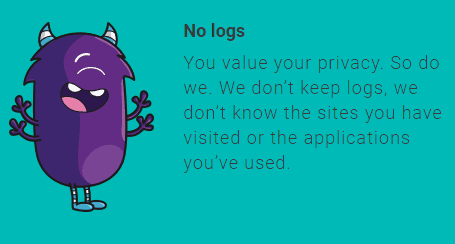 They say it multiple times.

But a company can be misleading on their official website. If you want a space where the truth has nowhere to hide, always check the privacy policy.

I had to do some digging to find VPN.ht’s policy, hidden away in their Terms of Use page.

There you have it. They’re not logging your activity, and they’re not holding onto any personally identifiable information (PII).

That’s amazing news and gives me hope for this VPN provider.

The next step to evaluating a VPN is to see which kind of protocols and encryption they’re packing.

After all, this is another huge piece of the security puzzle. It won’t matter that a VPN service isn’t logging your information if a hacker can just crack through your weak encryption and gain access to your data.

Thankfully, that’s not an issue with VPN.ht.

For a tunneling protocol, they’re using OpenVPN, which is widely considered to be the best VPN protocol in the world.

What makes it so great?

It’s open sourced, meaning it is maintained by the entire online security world. That’s the best option available from the brightest minds in the security industry.

They’re also using AES 256-bit encryption, which has proven to be impenetrable — even by the standard of modern supercomputers.

This is the encryption used by the United States military, the NSA, the FBI, and massive tech giants like Microsoft and Apple.

So you’re in some good company!

Not the fastest we’ve seen, but definitely manageable enough to put in the Pro column.

The fact of the matter is that all VPNs will sap away speed. It’s just a matter of how much. Some take a harmlessly small percentage, while others slow your browsing session to a screeching halt.

We tested two of VPN.ht’s servers.

One was located in the EU and the other in the US. We measured their loss against our benchmark speeds and weren’t disgusted with the results.

The EU speed test was well within acceptable range, which was nice to see.

The US speed test is where things got a little dicey.

Those US speeds are pretty atrocious, but it was the EU speed that saved this from being cast down into the cons section.

They still managed to snag a 25th rank out of the 78 VPNs that we’ve reviewed.

A match made in heaven. Like peanut butter and jelly.

At least, that’s how it used to be.

VPN users used to be able to access geo-blocked content on Netflix from anywhere in the world. It was wonderful.

Then, Netflix realized that this was happening and put its digital foot down.

They enacted a new policy which blocks access to their service for anyone using a VPN or proxy.

Fade to black. (As in, the black screen that blocks you from streaming anything.)

That’s why when you find a VPN that works with Netflix, you grab onto it and don’t let go!

VPN.nt is one of those services.

Oftentimes when we find a VPN that works with Netflix, it will be because one or two of its servers worked.

But we tested five servers on the VPN.nt network and ALL FIVE of them passed with flying colors.

It’s one of only eight VPNs that we’ve encountered with this ability. That’s why you’ll also find it on our list of the best VPNs that work with Netflix.

5. Torrenting is Allowed (No Restrictions)

There are a lot of VPNs that ban torrenting services.

Or they relegate its use to their server backwaters of a few crappy slow ones.

Thankfully, this is not one of them.

As I mentioned before, VPN.ht was originally created to work with a BitTorrent platform, so torrenting is obviously one of their key features.

The ability to torrent ‘at will’ is something that all VPNs should embrace.

VPN.ht’s torrenting services are so good that they made it onto our list of the top torrenting VPNs.

I was happy with the response time and service offered by VPN.ht’s support staff.

When you click on the support tab on their website, you’re first taken to a knowledge base page which has a number of frequently asked questions.

If you can’t find what you’re looking for there, you can click a link on the left-hand side to open a support ticket.

It is super easy to miss.

But once you click on it, you just select the department you need to speak with and fill out their handy little form. 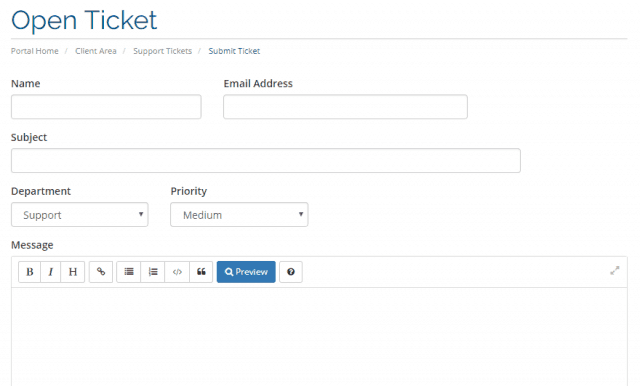 I asked a question about their tunneling protocols, and I got a response within 12 hours. 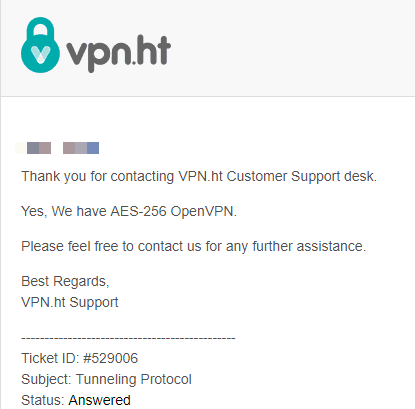 It was a quick and easy response. I would have liked to see a bit more explanation, maybe some context or a link to some additional information. But all in all, this was a pleasant support experience.

The installation and log on process seemed to take forever, but in reality, it was only about two minutes for each.

I downloaded their client program from the main site and got to work. 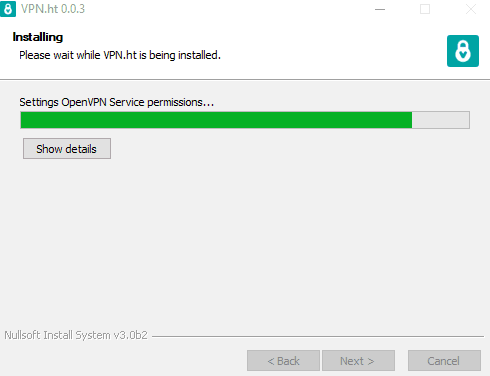 Once the program was downloaded I was treated to their colorful dashboard, featuring our alien friends from the website.

I selected a server in the UK and connected. 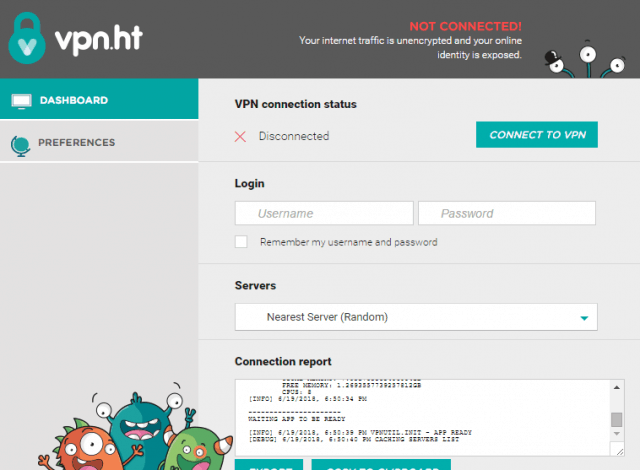 I entered my username and password and clicked connect. It took a few minutes but soon I was online and anonymous. 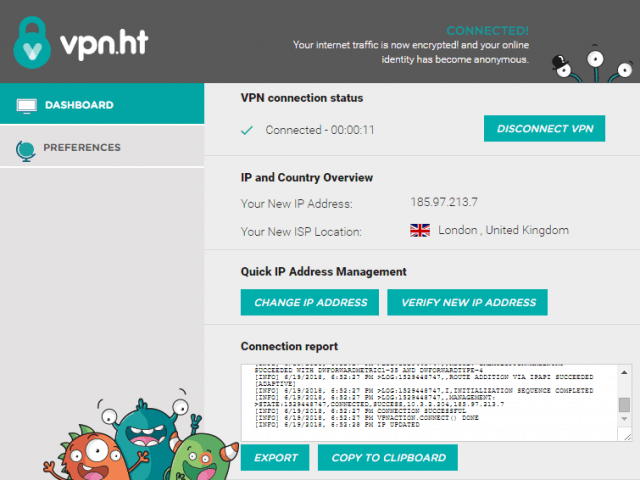 The browsing experience was a breeze. I was getting good speeds and Netflix worked beautifully.

I even snuck in a few seconds of Rick and Morty before I streamed some more video content on YouTube.

A good experience all around.

But then we discovered a number of issues.

We found IP leaks and a virus, which is the ultimate VPN kiss of death. That, coupled with there being no built-in kill switch really upsets our security mindset.

Device support was limited. It’s not compatible with either PlayStation 4 or Xbox One.

Also, its server park is smaller than normal, which is disappointing. Here’s the in-depth analysis.

On the surface, the fact that VPN.ht’s home jurisdiction is outside the extended 14 Eyes Alliance is a very good thing.

The 5 Eyes, 9 Eyes, and 14 Eyes Alliance member countries pool their espionage efforts and share information amongst one another.

So if one nation gathers intel on you, they all end up with access to it.

Thankfully, Hong Kong has nothing to do with this arrangement.

The issue here is that Hong Kong is still apart of China. And China only allows “Government sponsored” VPNs.

What does that mean exactly?

It’s muddy. And that’s the problem.

Essentially, it means each VPN provider needs government approval before it’s allowed to do business.

And typically, authoritarian regimes (like Russia) will often demand backdoor access. Which again defeats the entire point of using a VPN.

IP leaks are VPN plague, uncovering your IP without you even realizing it.

These leaks occur because WebRTC APIs are interfering with a VPN signal, or DNS servers are causing the VPN tunnel to be completely overlooked. The presence of either of these leaks is problematic at best and disastrous at worst.

We ran four tests on VPN.ht, and it failed two of them. That’s a bad ratio. 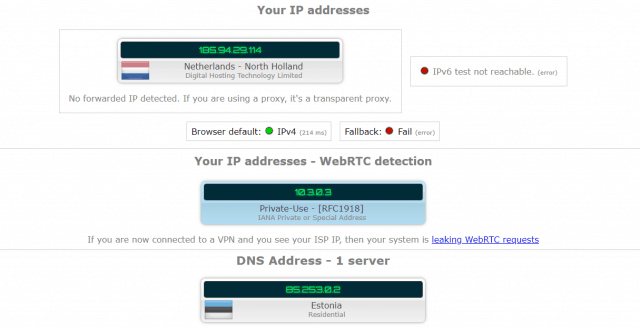 We also ran VPN.ht’s install file through a scan for 64 different viruses. We found one instance of adware, which is definitely not a good thing. 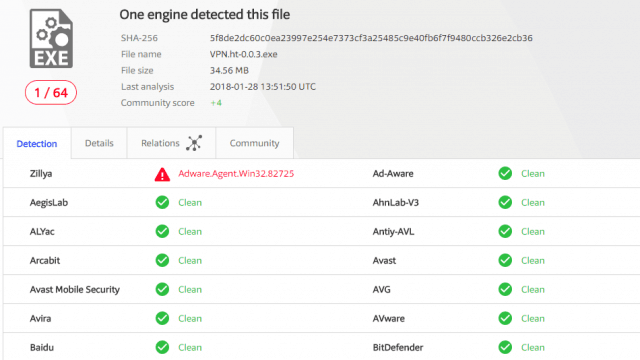 So not only is your true physical location going to be exposed to the world, but adware might also collect data on every site you visit, too.

The best VPNs on the market include a kill switch.

It’s becoming an essential Plan B for protecting yourself from the aforementioned links.

If your session becomes interrupted by a leak or any kind of malicious hack, the kill switch promptly boots you off, ending the session and closing out the VPN tunnel.

However, VPN.ht does not include such a beneficial feature. Boo.

Computers and phones are great.

Most of the VPNs that we review support Windows, MacOS, Android, and iOS.

But what we really love to see is smart device support.

The good news is that VPN.ht does support all of the major platforms and some routers. The bad news is that they don’t work with Fire TV or PlayStation devices directly.

VPN.ht has got 128 servers located in 24 countries.

But when you consider that most of the top VPNs that we review have over ten times that amount, you start to see where VPN.ht falls short.

The other bummer is that VPN.ht only offers access for three devices at a time. Not the usually five (or more) we see from other players.

This is an affordable VPN.

They run a special promotion for your first billing cycle. 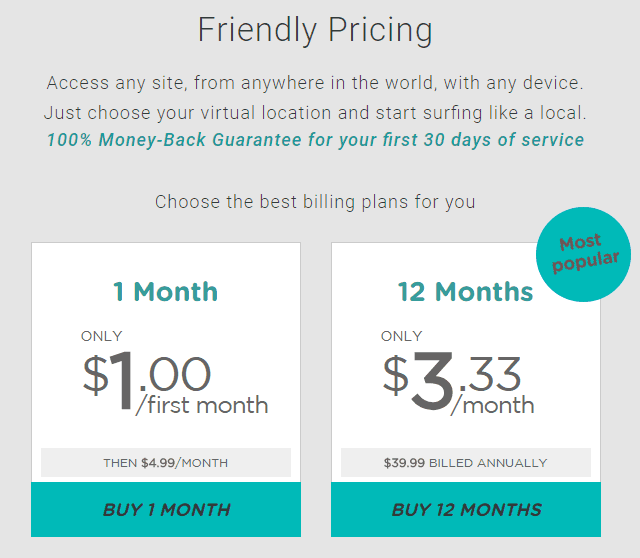 There’s only one premium plan, with no other tiered options. Whether you opt-in for a month or a year, you get the full power of the product with your purchase. 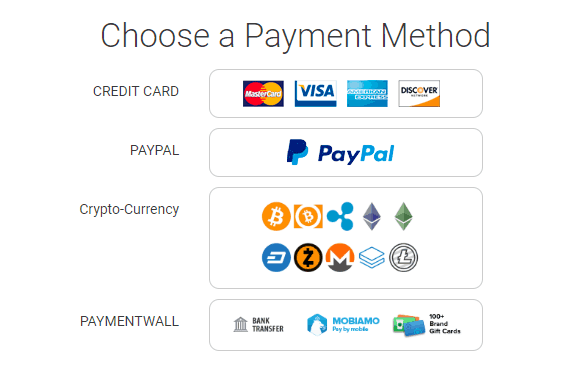 All plans also come with a 30-day money back guarantee, so they’re standing by their product.

Do I Recommend This VPN?

We initially loved many of their features.

Any VPN that will allow you to torrent at will and works across the board with Netflix is like the cherry on top of a security Sundae.

Having no kill switch protection and an adware virus attached to your install file are both serious no-nos in my book.

If they could tighten up those leaks, add a kill switch, and scrub their install files, I would consider it. But not now. Not when there are so many better VPN options available.

Add your own VPN.ht review

No user reviews for VPN.ht

… or add your VPN.ht review