There are multiple reasons why VPNs leak.

But a leaking VPN is useless.

You purchase VPN service for one very simple reason: Hide your IP and protect your data while browsing the Internet or using public Wi-Fi.

Leaks completely undermine this vital service, exposing your true location and activities right before the prying eyes of your ISP, government agencies, and cybercriminals.

It’s like buying a vacuum cleaner and having it blow dirt out all over your house.

Every VPN that we review goes through an extensive leak-detection process. We establish a connection with their servers and then use six different third-party tools to reveal our IP address.

If they don’t match the VPN’s stated server location, it means they are leaking…

Different VPN Leaks + How We Tested

Three most common leaks are:

We used the following sites (in addition to our own Chrome extensions test):

Unfortunately, this problem isn’t as far-fetched as it sounds.

So which ones are they? Find out in this list of VPNs that threaten your internet security with different leaks.

Below is a list of both free and paid VPNs where we found DNS, WebRTC, IP, or Chrome extensions leaks:

This was a VPN that failed just about every test that we put it through, including half of our leaks tests. WebRTC leaks were just one of the multitude of issues we faced with this problematic system.

They log your information and expose your IP, through both standard WebRTC leaks and Chrome extension leaks. Coupled with its outdated VPN protocols and encryption standards, you’re better off just not using a VPN like this one. 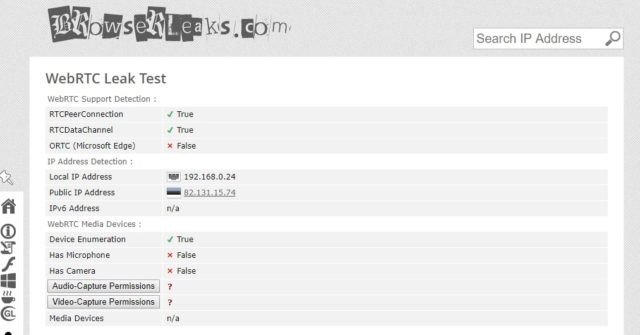 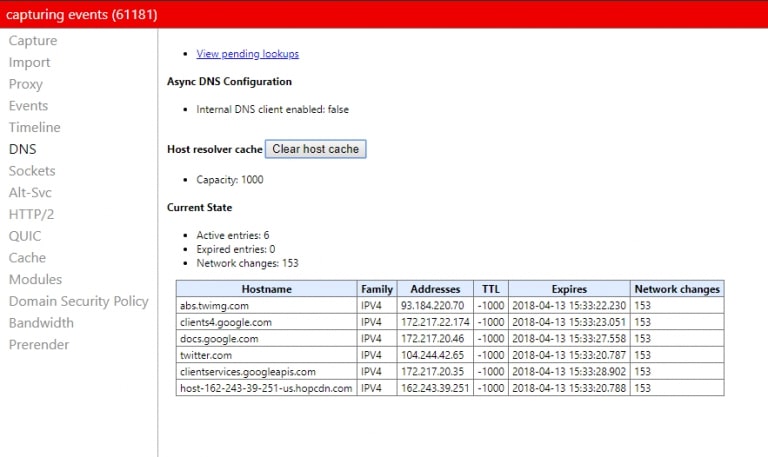 Hola is one of our lowest ranked VPNs. This free VPN logs your information and uses a sketchy peer to peer connection in lieu of traditional VPN servers.

It might be one of the least secure VPNs we’ve ever seen. It’s another ‘double trouble’ VPN that managed to fail both our browserleak.net and WebRTC tests.

VPN.ht uses a series of adorable aliens to let you know that with their service, you can be completely anonymous.

But apparently, they don’t run leak tests on whatever planet these little guys are from. Aside from the leaks, it was a pretty good VPN. They don’t log any information and they exist outside of the established surveillance alliances. This winning combination always eases my security fears a bit.

I just couldn’t get past the leaks…

We found IP leaks, but Spoiler Alert: this isn’t the last time you’ll be seeing this product on the list. 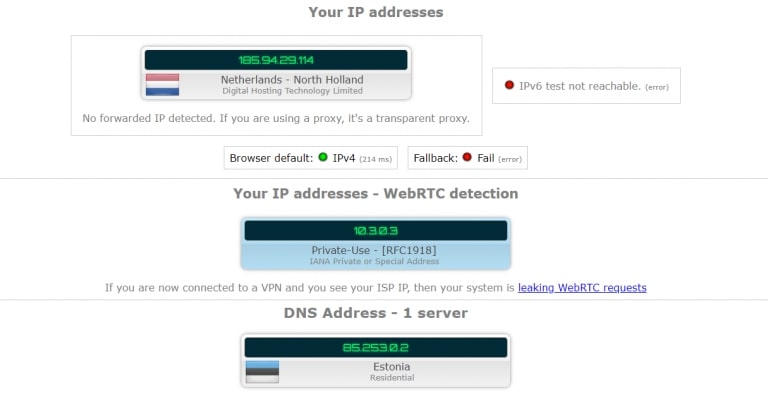 This VPN claims to hold “the key to online privacy” on their official website. But we found IP leaks that completely undermine this claim.

It’s a shame too because there was really a lot to love about this VPN. Fast speeds coupled with Netflix functionality and torrenting capabilities made it a strong streaming product. But those leaks were just too much to overlook. 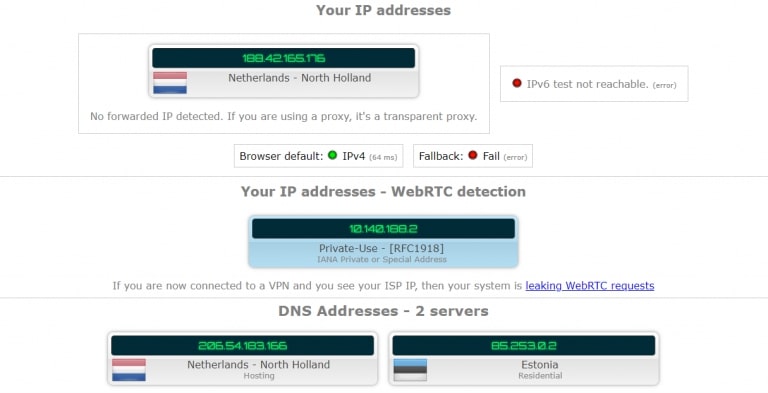 This company claims that they are “a better way to VPN.”

What they ARE is a slow (but affordable) VPN based out of Hong Kong. That means they’re free of the overbearing 5, 9, and 14 Eyes Surveillance alliances that pool government espionage information together. Yet still under China’s “government approval.”

Read more in our DotVPN Review.

We found DNS leaks on this VPN, but the presence of a kill switch feature helps somewhat. A kill switch will automatically disconnect you from the VPN service if the signal becomes compromised.

No logging and five simultaneous connections are some of the positives, but they don’t outweigh the danger posed by these leaks. 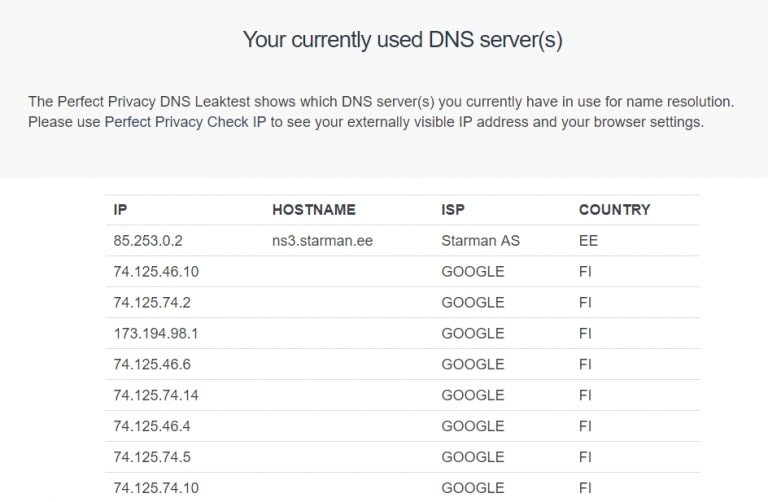 … and proof of the old adage that you get what you pay for.

For starters, it’s the slowest app we’ve ever reviewed. If that’s not bad enough, the company sells ads based on your own activity. Security is a huge concern thanks to the company’s policy of data logging.

But all of that pales in comparison to the leaks we found when investigating this service. Betternet’s Chrome browser extension was the main culprit this time.

Not shocking, since 70% of Chrome extensions leak your IP. 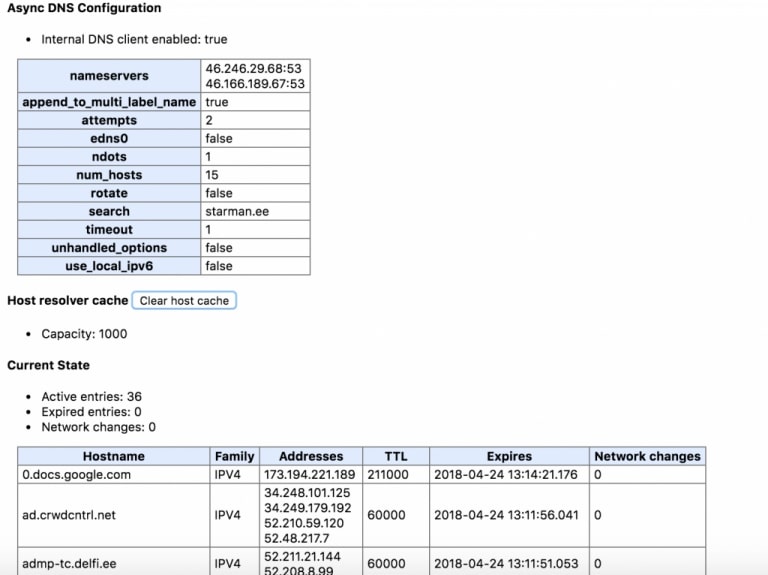 Read more in our Betternet Review.

Leaks, limited torrenting, and no Netflix derail what looked on paper to be a decent VPN. This is another one that passed our WebRTC test but failed when we examined their Chrome extension. The presence of a kill switch helps, but not enough. 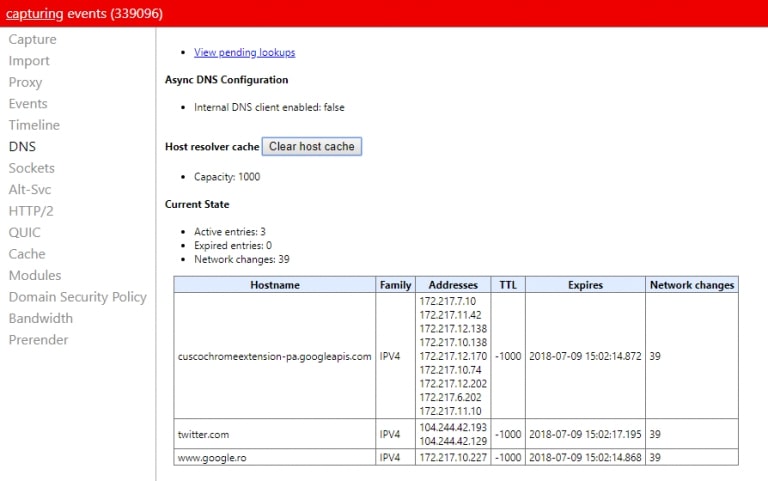 Free was the only positive thing we found to say about this VPN. It’s slow, logs your information, doesn’t work with torrenting or Netflix. Plus, they’re located within the 5 Eyes alliance jurisdiction. Steer clear. 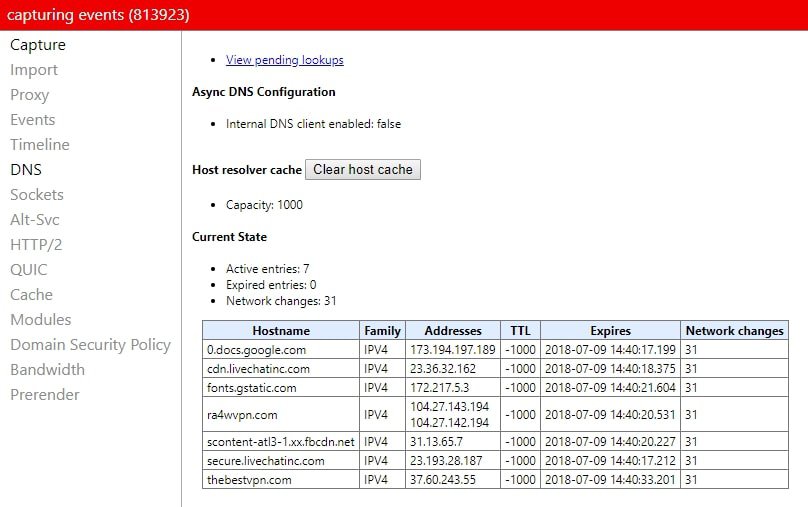 Read more in our TouchVPN Review.

This app left our IP address completely exposed. It has a decent server park and the built-in kill switch helps security somewhat.

But the presence of leaks plus a problematic logging policy forces us to question whether or not we can trust Zenmate. 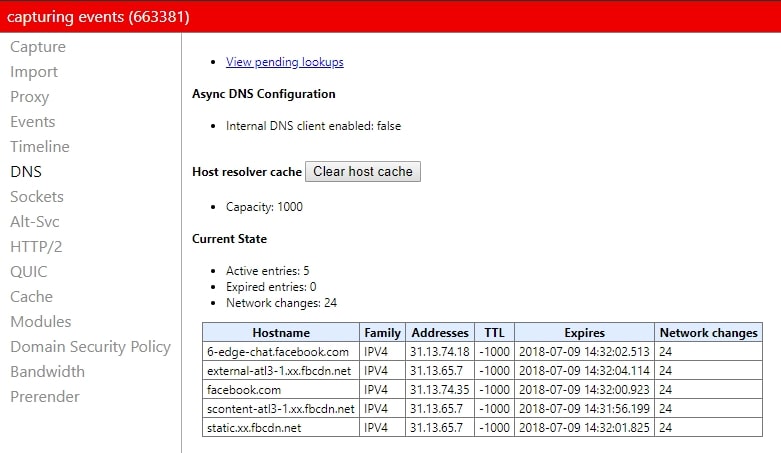 The problem is that WebRTC, as a protocol, leaks IP Addresses under certain circumstances. The change we made that prevents leakage may prevent WebRTC from working, so the user has the ability to switch this off, and use WebRTC. Once switched off, we remind the user to switch is back on as much as we can, but it is up to the user to do so.

Also, our smart locations feature may cause leakage. This feature switches the user’s selected server based upon the website they are visiting so that it is more likely to work that otherwise. This feature, again, may leak IP Addresses under certain circumstances. This feature is valuable to a lot of users as it improves their geo-unblocking where they are not 100% concerned about total security. This feature is turned off by default, but the user has the option to turn it on.

All in all, we are as good as or better than all other VPNs on the market as far as preventing leakage, however not all of our users want this as it may prevent them accessing certain features and function. So, we made is user configurable and warn the user when they may be compromising their configuration. If the test still shows that they are detecting leakage, then it is most likely they need to upgrade their version of the client.

Read more in our Zenmate review.

AceVPN started off OK. However, results quickly went downhill when we started putting them through our series of tests.

This is a slow-moving system that logs your data and only allows for two simultaneous connections. That being said, it worked with Netflix and features a kill switch.

But the DNS leaks were the last straw. 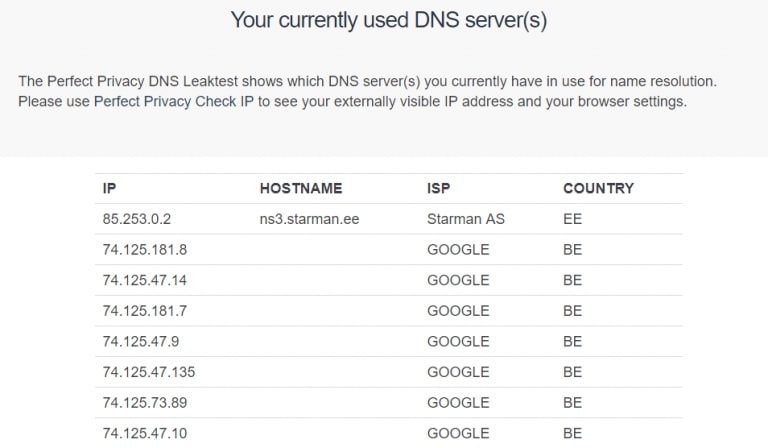 It’s hard to be “privacy-minded” when you’re suffering from DNS leaks. Another one, unfortunately, bites the dust.

On paper, it looked pretty good. No logging and there was Netflix/torrenting support. And with five simultaneous connections, it seemed like a decent VPN that the whole family could enjoy.

A lack of a kill switch coupled with the aforementioned leaks were some of the only dents in this program’s otherwise impressive armor.

BTGuard is extremely torrent friendly. Too bad it also suffers from DNS leaks. The point of VPN use while torrenting is to protect your system from malicious hacking attempts made by other users who are connecting to your system.

That protection is meaningless if your IP is exposed. While BTGuard focuses on torrenting services, it tends to ignore most other important features of a modern VPN. They log information, it’s a slow program, they don’t have a kill switch, and they only allow for one connection.

Leaks were just the cherry on top. 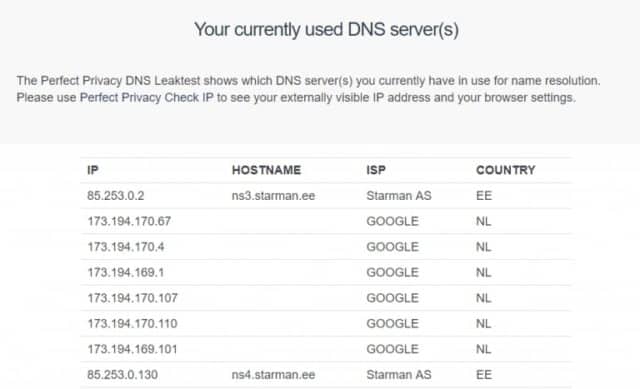 Read more in our BTGuard Review.

This VPN has secure encryption and an awesome customer service team, but it was undermined by both DNS leaks and some potentially malicious programs that we found in its install file. A kill switch could have gone a long way toward re-instilling some of my faith, but they don’t have one. 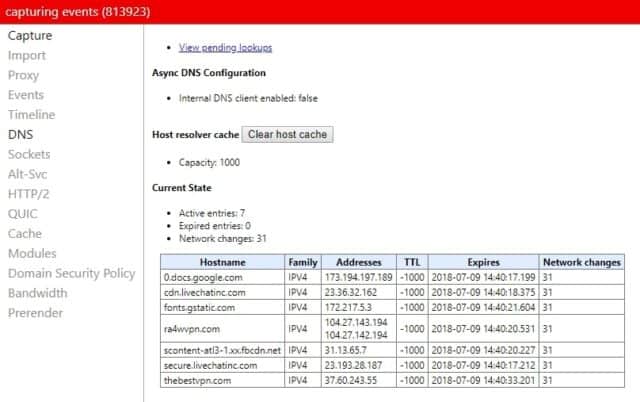 VPN Gate is a free VPN service from Japan. Unfortunately, that gate has a few holes in it in the form of DNS leaks. There’s not a lot to love here aside from the price point and the fact that it worked with Netflix.

Due to the leaks we found, it’s not recommended to use this VPN for anything other than light streaming. Nothing that requires anonymity.

Why Do VPNs Leak?

VPNs leak for a variety of reasons. DNS server issues and WebRTC API conflicts can cause your true location to shine through. The problem is that these often strike when you least expect it.

Your VPN connection looks legit. There’s no notifications or other errors. But your ISP, government agencies, or cybercriminals will see absolutely everything.

You can have strict no logging policies, exist outside of every major surveillance alliance, and have lightning speeds, but if a VPN is leaking your IP, you’re toast.

That’s why when you find a VPN that is airtight, with no leaks whatsoever, you should stick to it like glue. Here are some of our favorite.

For a more in-depth analysis, check out our list of the top ranking VPNs.

How to test if your VPN is leaking

Once you are connected, you can do your own leak testing: